IDP: Extraction of Vessels from Angiograms

Many applications in computer-aided surgery require an automatic and exact localization of vessels in contrasted radiographs (see Fig. 1). However, the segmentation of 2D images is more difficult than segmenting 3D images because of less information contained in the data. In addition, radiographs are projections leading to occlusions (of vessels with other anatomical structures like bones as well as with other vessels). The objective of this project is the implementation and test of different methods for vessel segmentation based on eigenvalue analysis.

The implemented methods should be tested on different angiographic sequences (esp. rotational angiography with stationary C-arms). The images have no radial distortion since they are acquired with a flat panel detector. The pixel spacing is 0.3mm or 0.6mm which is small enough for segmenting the coronary arteries, our main target vessels. 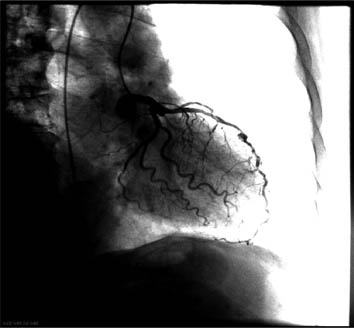 Before segmenting vessels we improve the images by adjusting the signal-to-noise ratio and subtracting the background in the preliminary steps. The influence of the image processing [1-2] steps on the final segmentation results will be also analyzed. Most vessel segmentation techniques [4-10] are based on their linear structure and employ an eigenvalue analysis of the image intensities. Furthermore, the data will be analyzed at different scales because vessels have a varying diameter and get smaller as the degree of branching increases. Therefore, all methods have the computation of the Hessian with several derivatives of Gauss kernels on several scale steps and the subsequent eigenvalue analysis on every pixel in common. The final thresholding yields the pixels which are inside the vessels with a high probability.

Several well-known vessel segmentation/enhancement methods from the literature will be implemented and tested. The evaluation of the results should be quantitatively compared with manually segmented data. Furthermore, the accuracy improvement which is possible by specializing these algorithms to the problem at hand should be investigated.