The app is part of the enable platform which aims to reduce the number of diseases for young adults by changing their eating behavior. Therefore, a lot of mini-games are created which should motivate people to make sport and eat healthier. Our app is exactly one of them and tries to increase the amount of healthy food consumed by people by combining an achievement system with social community components. To put it in more detail, the app offers the possibility to host cooking events together with friends and get points for including predefined, healthy ingredients in the meal. 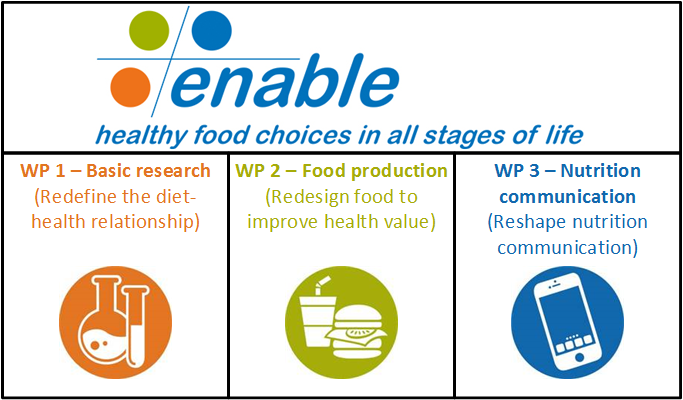 During the last years our nourishment has gotten too energy-rich measured on our living standards. This leads to an increase in a lot of diseases like cancer, diabetes, adiposity, and cardiac and circulatory troubles. To decrease the number of such diseases we need to change our nourishment and eating habits. Therefore, a large number of experts from different fields have banded together to form the enable-cluster which aims to help people in changing their lifestyle and researches the correlation between nourishment and the human genome. To achieve these goals the project is split into three main parts, whereas WP 3 uses different communication and information technologies like social networks and games to positively influence the eating behavior of users. Within the scope of our master lab-course we joined the enable-team at the TUM and worked in the area of communication of nourishment at a platform which joins multiple serious games. These games try to provide the user with more information on healthy nourishment through nutrition value-guessing or calorie thresholds and intend to motivate the user to eat healthier and exercise more.

The core idea behind our game is that we want to motivate people to eat healthier food by bringing them together with friends and let them cook healthy meals. To do so, the app allows users to create cooking events which not only provide the user with a calorie threshold he needs to meet, but also with three random ingredients he needs to include in his recipe. The calorie threshold should help the user to get a feeling for the calories in a meal. Through the random ingredients, the user should be motivated to try out new things and experiment a little. For users, which don't like to experiment we also provide a recipe suggestion function which uses the recipes in our database and covers the ingredients. As cooking is more fun when done together we provide an invitation function for the events so that the user can invite all registered friends. Another advantage of this feature is that the people can motivate each other to really do the event and get as many points as possible.

In the first iteration of our project we build low fidelity prototypes of our game which cover the three main user goals: 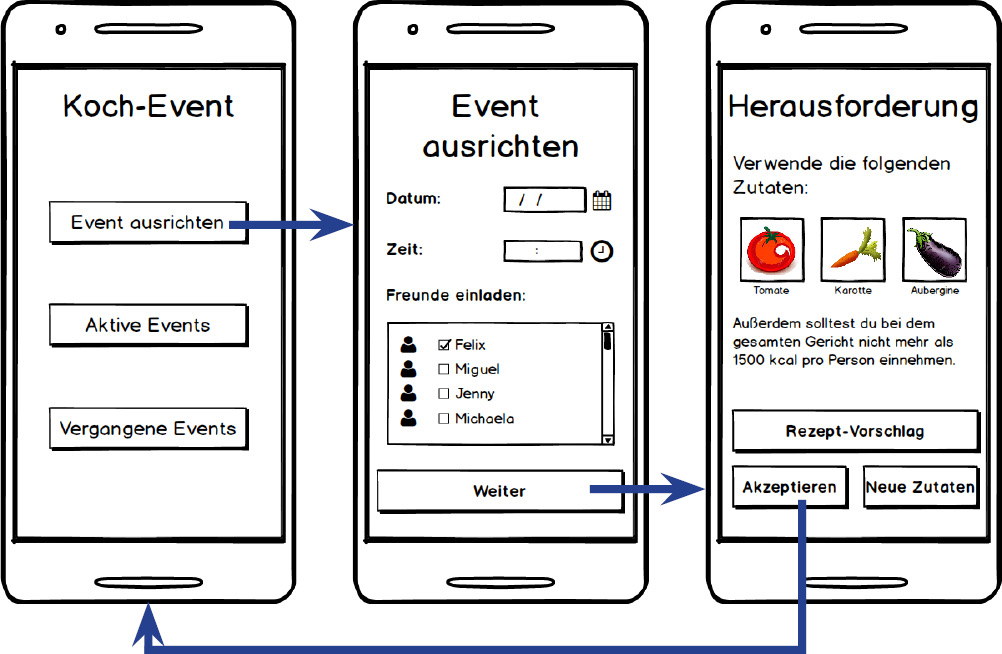 The first task a user needs to perform when playing our game is to create an event. Therefore, the user should press the "Event ausrichten" button, enter the event specifications and accept the challenge offered by the system. Feedback: Change the last screen with the second one to first see the challenge and then decide who you want to invite. 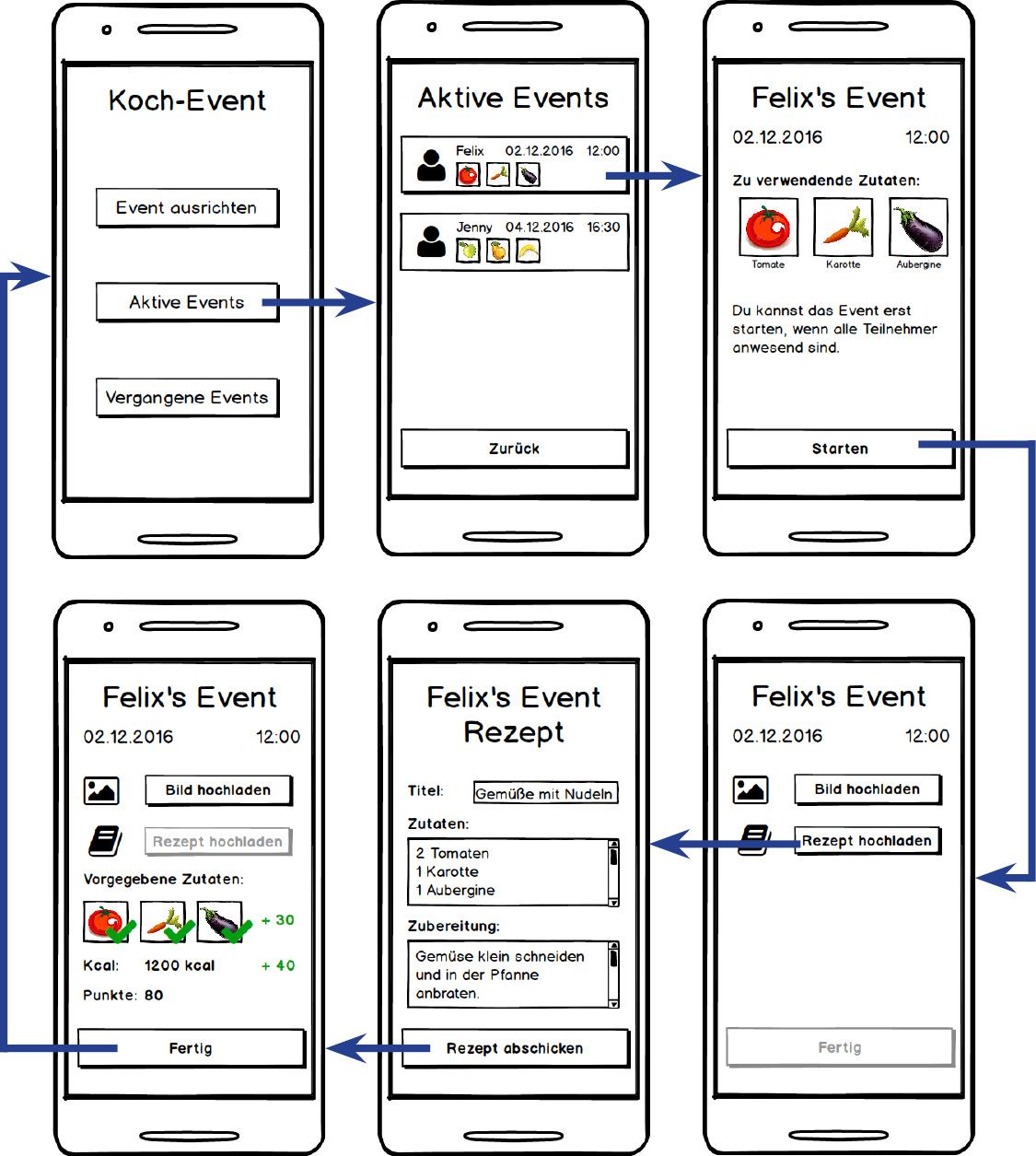 After creating an event the user also needs a possibility to finish it and get his points. To do so, the user has to select the button "Aktive Events". The subsequent screen will show a list of all active events which can be selected. At the following screen the user gets to see the three ingredients he needs to include in the meal as well as the calorie threshold he needs to stay under. After the meal is finished the user presses the "Start"-button to get his points. The next screen allows the user to enter the recipe and upload a picture of the meal. In addition to that the screen also shows the acquired points and the number of calories the meal has. Feedback: Support the input of ingredients by a search or auto-complete function. 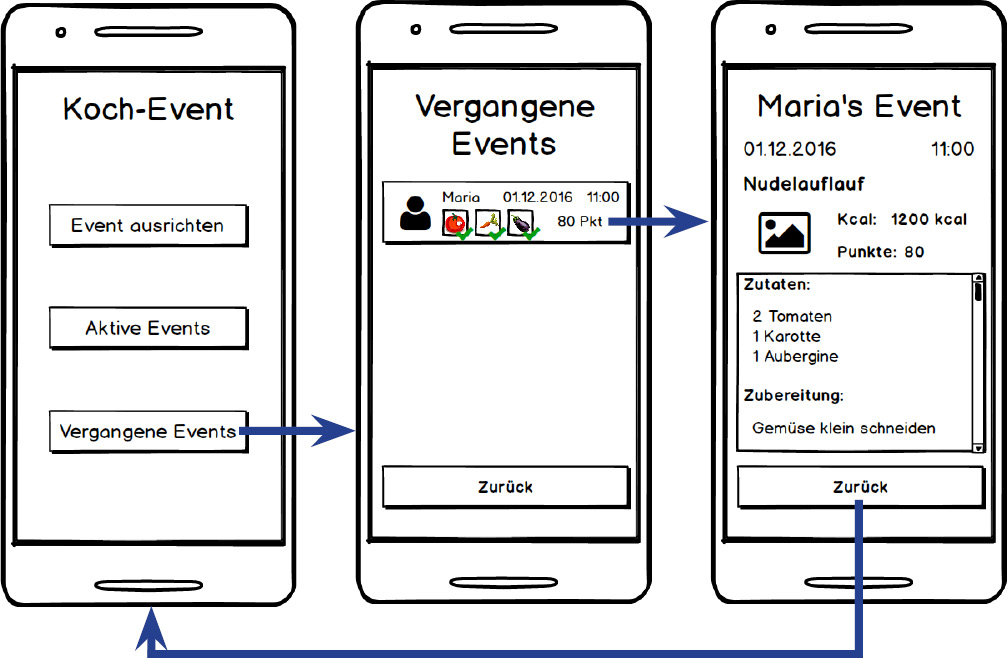 By completing the event the user also needs a possibility to review former events. To do so the user needs to press "Vergangene Events". Feedback: Nothing to change. 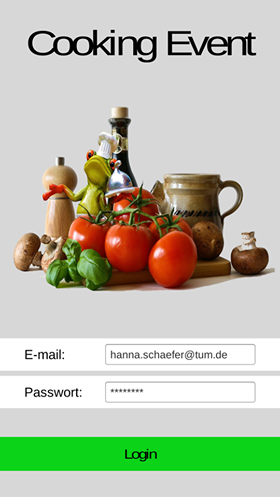 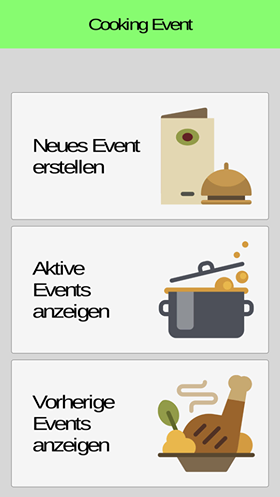 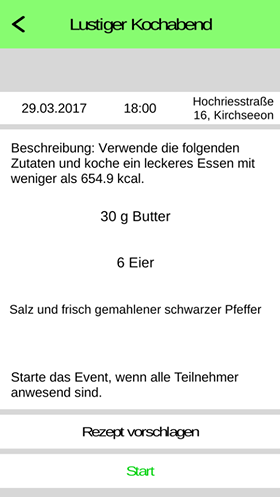 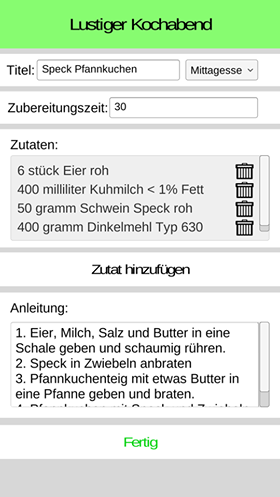 When designing the interfaces we wanted to have a modern, flat design which fits with our target group. We decided to use a green colored theme for our app as this color represents healthy food and living. The color is used as background color for very important buttons, as a font color for main buttons to show the user which buttons get him further in achieving his goal and as background color for screen headings which include the title of the screen and an arrow to get back to the last screen. All information are encapsulated in white rectangles except the headings and the "Login"-button. To support the flat layout the rectangles as well as the buttons are stretched over the whole width of the screen. The buttons are visually highlighted by bold fonts and always have the same high, but otherwise do not differ from the rectangles which give the screens a uniform layout. For the start screen we decided to make the buttons space-filling and combine them with pictures to make them more appealing.

As we had only a limited amount of time for our app there is still room for improvements.

During the event creation process, we present the user with a calorie threshold to be able to test the healthiness of the meal later on. However, calorie alone is not sufficient to estimate the healthiness of a meal. Therefore, it would be better to broaden the threshold and include other nutritional values as well.

Another improvement idea would be to let the user influence the thresholds by selecting a goal which should be reached at the end of the year. Depending on the goal the thresholds could be slightly adapted. This function would be good to support dietary plans for example.

When creating an event, we are able to suggest recipes to the user based on the randomly selected ingredients. However, we don't take into account which menus the user cooked last. Thus, it could happen that we suggest the same recipe to the user multiple times. To prevent this from happening one could track a history of the last meals and compare the possible recipe to this history before suggesting it to the user.

Right now, the app presents the user with three random ingredients from the database which should be combined in a meal. However, the app does not consider if the user is vegan, vegetarian, has an intolerance or anything like this. To do so, it would be helpful if the user profile could be extended to include such food profiles as well. In addition to that the recipes and foods in the database would need to be categorized even more to select the appropriate ones. If these two parts would be fulfilled the ingredients could be selected based on the food profile and these categories.

At the moment, the user needs to cook whatever kind of meal the random ingredients allow to do. One improvement idea would be to implement an event category selection before searching for random ingredients. The selection could be one screen where the user can select if he wants to cook breakfast, dinner, lunch, vegetarian food, soup, dessert and so on. Based on this selection appropriate ingredients are selected for the user.

Another possible extension of our app would be a recipe voting where the users can assess the suggested recipes based on taste, difficulty and so on. This would improve the recipe quality in the database as recipes with very bad votes could be deleted and not be suggested to other users.

When starting an active event the app does not assess if all participants are at the correct location which opens the possibility of cheating. To make cheating more difficult the app could track this before allowing the user to even start the event. However, when doing so the app also needs to offer a participant management function for the administrator so that he is able to delete people who are ill or do not want to come to the event anymore.

At the moment, the app shows a user all events he is hosting or he is invited to without the possibility to unsubscribe from an event or delete one. As people tend to have many friends their active events list could get quite long without the possibility of deleting events. Therefore, an invitation management system could be created to change this.

An extension of the actual game would be the possibility to enter all ingredients the user has at home now and present him with an appropriate recipe. This would help the user to cook healthy food while taking care that the ingredients at home don't go off and need to be thrown away.