This tutorial should help you to understand how you can add automatic layout and label placement to your applications. It first guides you through a simple demo application and than explains the most important aspects of the LayoutManager interface. It finally gives a rough overview over the implementation of automatic layout in the DWARF framework. If you are interested in the details of the properties which lead to automatic layout decisions then you are welcome to read my diploma thesis: Issues in View Management for 3D Objects on Multiple Displays

For this tutorial, you should

In this lesson you will learn to start a simple demo showing some of the capabilities of the LayoutManager.

Install DWARF as usual with the bootstrap, configure, make install cycle but add the option --enable-label to your configure command. This will build and install a version of DWARF able to run the simplelabel demo.

To run the simple label demo open a shell window and change to the DWARF installation directory (usually ~/dwarf/bin). Now execute ./run-servicemgr simplelabel in the shell and wait until several new windows appear. 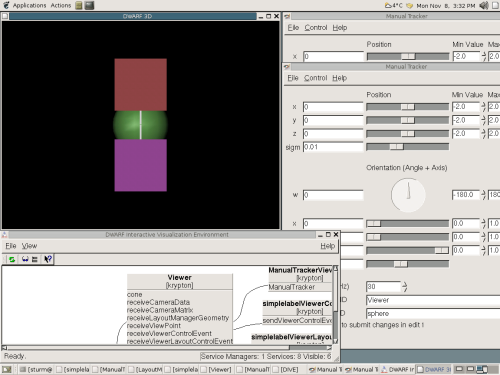 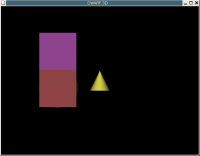 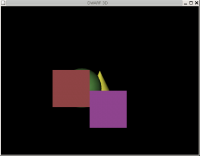 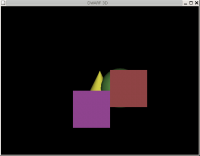 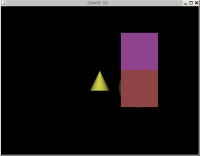 Lesson 2: How automatic layout is added to a DWARF application

Automatic layout can be added to almost any scene of a DWARF application. The first step is to add objects and labels to the scene. The objects can be anchors for labels, obstacles or both and be part of the 3D or 2D scene graph. The labels can be any object but are limited to the 2D scene graph.
The objects can also already be part of the scene loaded during the Viewer startup, but in this case the parent node of the objects must be a SoSeparator or a SoVRMLTransform node! Any object added to the scene via the ViewerControl interface will work. Now you need to create a layout area in the Viewer. Normally this is the complete visible Viewer window. It is done via the ViewerLayoutControl interface. This is the sample python code to do this: Next you need to register any object taking part in the layout in the Viewer. This is done with the ViewerLayoutControl interface. E.g. you send a command to define an object as label-anchor or as an obstacle. Or you define an object to be a label which then is automatically placed. Don't get scared by all the parameters to the ViewerLayoutControl, they are all explained in the ViewerLayoutControl.idl file. But in a first try use the ones from above. Most interesting are the first two object constraints. The first constraint is either VLC_RECTANGLE or VLC_POINT. In the first case the objects bounding box is used for layout and in the later the middle point of the objects bounding box (e.g. a label-anchor can be a single point, but a label should always be a rectangle). The second object constraint decides which parameters can be modified by the layout algorithm. E.g. label-anchors and obstacles normally are not touched by the layout algorithm, therefore they have a VLC_ALL_FIXED property. And labels normally are only fixed in their size but not their position. Therefore they have a VLC_SIZE_FIXED property.
The parents property of an object finally defines to which area an object refers. E.g. obstacles normally have the screen as their parent and labels their anchor object.

The picture below shows a DWARF application with automatic layout. It consists of 3 services. The Viewer which displays the scene, a python script which sends ViewerLayoutControl commands to the Viewer to initially setup the layout in the scene and the LayoutManager receiving LayoutManagerControl? commands from the Viewer and returning the calculated layout result back to the Viewer. 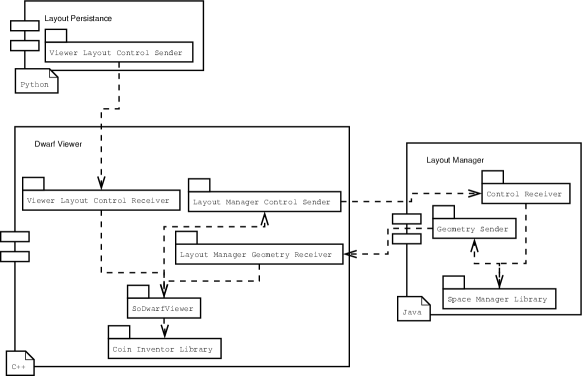 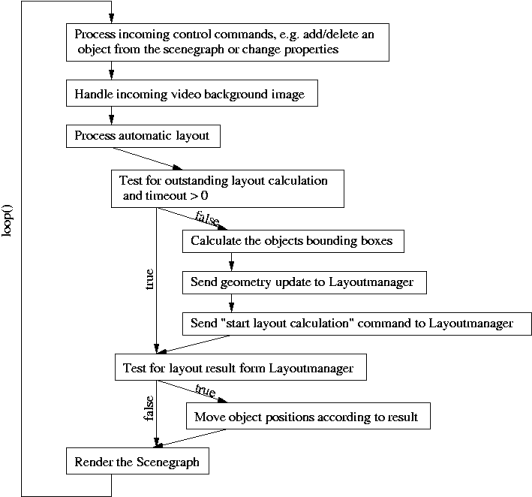