With recent advances of Head-up Display (HUD) technology in cars, Augmented Reality becomes interesting in supporting the driving task. At our lab, we have a driving simulator and are currently setting up a HUD with a tilted image plane. The image plane of a normal HUD appears to be vertical to the driver, while a conformal HUD has an image plane that lies on the street. So it is capable to provide depth based information.

Sketch of the planned contactanalog HUD (Courtesy of BMW, adapted) 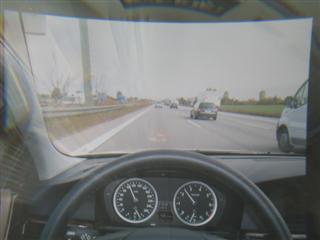 Picture distored by a fresnel lense
This thesis focus resides in mechanically adjusting a linear motor to tilt the focal plane and therefore adjust it to the flat road. When this works properly, rendered virtual 3D objects must be rendered onto a textured object in order to compensate distortion of the cars windshield.

Generate Projectionmatrix from eight viewpoints. That cube specifies the volume, head moves inside.

Fresnel lense distortion in general is static, but dependent to viewpoint.

Every windshield generates another distortion of the image.