Mobile Augmented Reality applications promise substantial savings in time and costs for product designers, in particular, for large products requiring scale models and expensive clay mockups (e.g., cars). Such applications are novel and introduce interesting challenges when attempting to describe them to potential users and stakeholders. For example, it is difficult, a priori, to assess the nonfunctional requirements of such applications and anticipate the usability issues that the product designers are likely to raise. In this paper, we describe our efforts to develop a proof-of-concept AR system for car designers. Over the course of a year, we developed two prototypes, one within a university context, the other at a car manufacturer. The lessons learned from both efforts illustrate the technical and human challenges encountered when closely collaborating with the end user in the design of a novel application.

A designer sees a virtual and a real car (or a mockup) side-by-side. He can move back and forth between the cars and compare them freely.

A designer sits at a desk and inspects a virtual car on his hand by moving and rotating it. 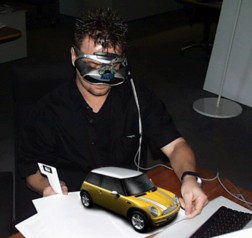 (Virtual car on a designer's palm)