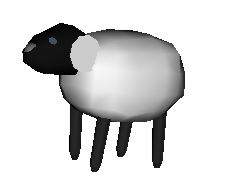 This is a simulation of a sheep walking around in the landscape and doing nothing. The behavior of the virtual sheep is based on a distributed variant of a simulated flock of birds. Each sheep is a single process that is connceted to the other sheep and receives their position information. It then tries to stay close to the center of the herd while at the same time avoiding collisions with other sheep. In addition to the virtual sheep we have also a fake plastic sheep that is tracked by our system and can be moved around freely by the user. For the virtual sheep, the tracked position information of the fake sheep is indistinguishable from the other virtual sheep, so in the end of the day the virtual herd will center around the plastic sheep. The sheep simulation at this point is not highly advanced. For example when introducing a second plastic sheep, the virtual herd will center in the middle between the two plastic sheep. This component could be easily replaced by a better simulation. In fact when we were testing the system, for some time we had the sheep only running aroud in circles until the simulation code was ready for deployment.

As stated in the Sheep.xml file, the service has the following Needs and Abilities.

No special packages are required. If you have a running DWARF installation, do a make install in the Sheep directory. This creates an application called Sheep which can be started on the command line.

Start several Sheep, start some service that needs PoseData (for example ServicePoseDataReceiver?). Have fun with ServiceDIVE then.

The original underlying Boid simulation is not really used anymore right now; the source needs significant cleanup at this point. There is a known bug that a sheep that dies is not removed from the Boid simulation. It stays there as a zombie and is still used for calculation of the new direction. The sheep does not yet respond to change color events. There is an issue that a resumed sheep that is woken up at a new position still reappears at its old position.Or somewhere else. It is not yet know whether this bug resides in ServiceSheep or in the user interface controller or somewhere else, though. Innocent until proven guilty.