The cvs branch formerly known as Viewer_2_0 is now merged as the main version (aka. cvs head). This means from know on every service should be written to use this new viewer and its interface. Older services should be ported to the new interface as soon as possible. This new version brings you: Warning: The old version of the interface is discontinued and won't be updated anymore. 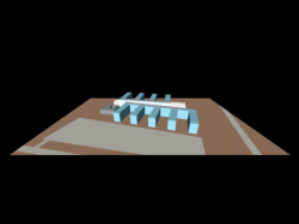 This is the 3D Renderer for usage in DWARF applications. It is highly specialized for and integrated within it's DWARF environment. The DWARF Viewer supports rendering of 3D scenes in various file formats such as OpenInventor (.iv) VRML 1&2 (.wrl). Further the DWARF Viewer supports 3 different render modes for mono- and stereovision. In addition the viewer supports a videoseethrough mode where a videosignal is overlayed by 3D Graphics. The viewer is based on the OpenInventor Implementation Coin by Systems in Motion. The position of the virtual camera and arbitrary objects in the scene can be modified with tracking data delivered by DWARF tracking subsystem. Thanks to the Studierstube project for providing code snippets and ideas through their open source Framework.

As stated in the Viewer.xml file, the service has the following Needs and Abilities. (the following are for automatic label placement, still in unstable phase, can safely be ignored)

The Viewer can be controlled by the UIC?, the ServiceModel?, a combination of both, or arbitrary DWARF services which send DWARF events for SceneData, UserAction?, and CameraMatrix.

Source is, to a certain degree, commented

Just start the ServiceViewer and the ServiceManualTracker and set the ThingType? to "Viewpoint". Use the -Dmodel command line parameter to load an Inventor or VRML model on startup.

The ServiceViewer has a very limited or none errorhandling (e.g. it'll crash if you try to select a 3D object that isn't in the scene). Q: How can a virtual camera be modeled with only one internal parameter? What about distortion and image center? JoergTraub 10 Oct 2003