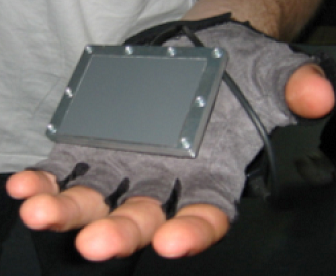 The TouchGlove input device is a new input device developed by the Columbia University. It consists of a half-glove and touch-sensitive surface device which is mounted on the palm portion of the half-glove.The physical design and the interaction method make it possible for the user to interact simultaneously with a wearable computer, as well as with objects and machines in the environment. Input is performed using both tapping and dragging motions of the fingertips on the surface.

Three services were implemented to support this input device in the DWARF environment: