Interaction in an immersive virtual environment (IVE) such as a CAVE is divided into three main tasks: Travel techniques, selection/manipulation techniques and system control techniques. Users are active participants in the 3D computer generated virtual world, and are able to explore, select and manipulate the world and embedded data. In this work a travel technique is going to be investigated in a virtual environment in general and specifically in an immersive virtual environment as a cave. The analysis of any travel task has three criteria to be included in any travel techniques: The selection of the direction or the target of the motion, the indication of the velocity and the acceleration of the motion and the indication of the beginning continuity and the end of the motion. The travel technique in this work is: Phone based motion control: The basic idea of this travel technique is simulating a locomotion technique or a walking in place method using the thumb on the touch handheld device in this case Android phone. In this Bachelor thesis the first part is to implement the 2D translation part. Using Android SDK, the translation gesture of the user on the android device is detected and the translation value as well as the speed and angle of the is obtained. This data is sent via socket asynchronously to the visualization software to calculate the view matrix.


On a later stage the device is tracked (trackers: orientation/Magnetic sensors data), to get more degree of freedom. Touch-Phone based motion control technique (developed earlier) is used is to control the viewpoint motion translation and the steering/flying technique to control the viewpoint motion orientation (Steer-Phone based motion control). The purpose also of this work is to investigate the necessary degrees of freedom for the user to travel intuitively and confortably in a terrain, and diferent speed variation technique. 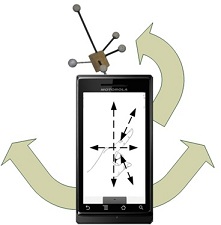