An aortic aneurysm is a local dilatation at the thoracic (15%) or abdominal (85%) part of the aorta, caused due to the thinning of the inner aortic wall. The endovascular stenting is a minimally invasive approach for the treatment of aortic aneurisms and it involves the exclusion of the aneurysm of the circulatory system with the placement of an implant, the stent. In the current clinical workflow, a CTA (Computed Tomography Angiography) scan of the region of interest is acquired some days before the operation. It helps the surgeon to exactly detect the aneurysm and the aortic bifurcations on the aorta (especially the renal arteries and the arteries on the arch for the blood supply of the head (brachiocephalic trunk, left common carotid, left subclavian), calculate its dimensions and select the appropriate implant, based on the length of the aneurysm and the diameter of the aorta at that place. Intraoperative, the stent is introduced from the femoral through the iliac arteries till the region of interest in the aorta. It is constructed with a self-attachment mechanism and, after it is unfolded, it replaces the inner wall of the aorta. A mobile fluoroscope, a C-arm, is used to support the procedure of the navigation towards the aneurysm and the positioning task of the implant. For highlighting the vessels, contrast agent is injected in the circulatory system during every x-ray image acquisition process. For the implantation of a single stent, ten to fifteen x-ray image series are required. However, the frequent use of the C-arm increases the radiation exposure in the operating room and the number of injections of contrast, which is very harmful for the patient. In this thesis a system for intraoperative three dimensional visualization of the patients anatomy, together with the actual stent position in the aorta and for navigation towards the aneurysm is proposed, with the objective of more accurate implantation and minimization of x-ray image acquisition.

Requirements of the System

For the reasonable application of the system in the operating room, some preconditions have to be fulfilled

Implementing a fiducial based calibration and registration, the detection of the CT spots in the CT scan and in any particular x-ray image is necessary. For the segmentation, two separate approaches have been considered, due to the different acquisition properties of the two image intensifiers (CT and C-arm). To summarize, thresholding , region growing and circular object detection are some of the applied algorithms. In the three dimensional space, the centroids are determined via weighted intensities and partial volume effects and in the two dimensional by calculating the gravity centers of detected circles. The 3D segmentation is performed preoperatively, whereas the 2D detection is realized online. The success of the detection algorithms lies in both spaces over 90%.

With position recovery we indicate the determination of a point (structure) in space, using one or more of its two dimensional projections (images). In this case we recover the position of the stent and visualize it in the volume rendered CT scan by using one intraoperative X-ray image. First, the segmented aorta is skeletonized and the one-voxel thick centerline is determined. Having computed the intrinsic and extrinsic parameters of the current projection, the particular image creation process can be defined. Thus, the position of the stent in the X-ray image can be back projected into the volume. The intersection of this ray of sight with the centerline of the aorta can represent the actual three dimensional stent position with a sub millimeter accuracy. For validation and visualization purposes, the visual overlay of the two available image modalities, the CT data and the X-ray image, has been implemented. After initializing the CT volume with the particular intrinsic and extrinsic camera parameters, a DRR is acquired and overlaid with the actual X-ray image. The overlapping of the CT spots in both images can be used to determine the accuracy of the system. Moreover, the aorta, visible in the CT (CTA) can be made visible in the X-ray image without the injection of additional contrast agent. 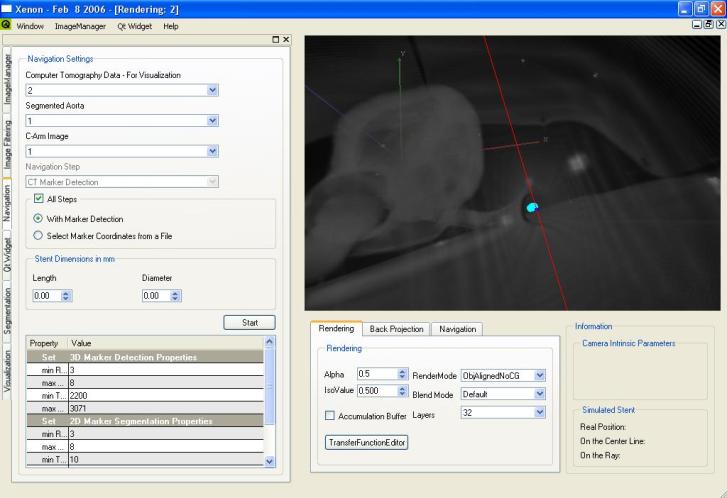 User interface of the application 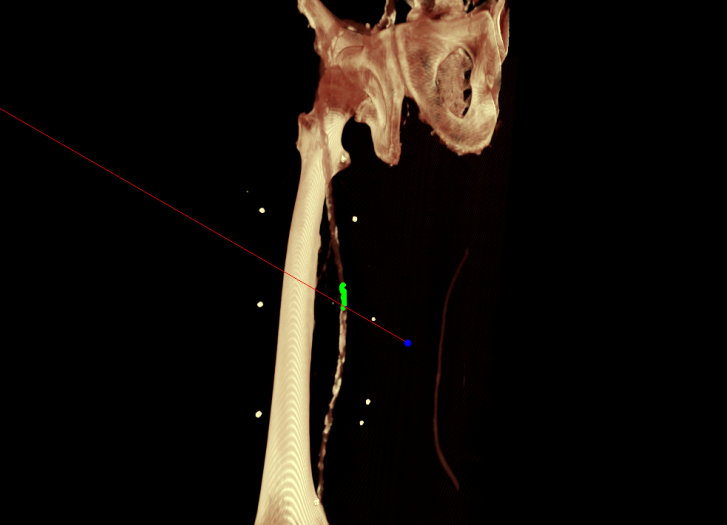 Stent visualisation during the minimal invasive surgical treatment of a stenosis of the femoral artery.
Blue is the camera center (the source of the C-arm) 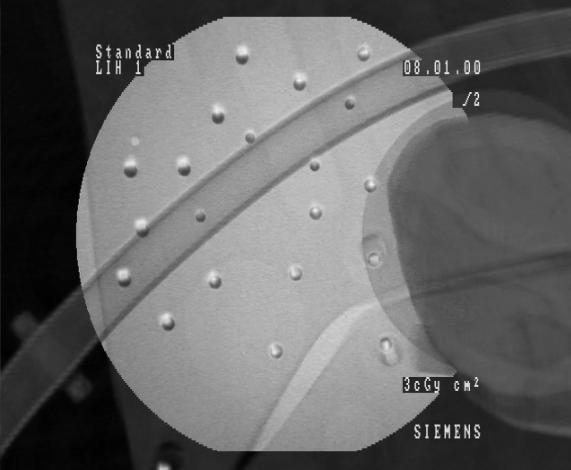 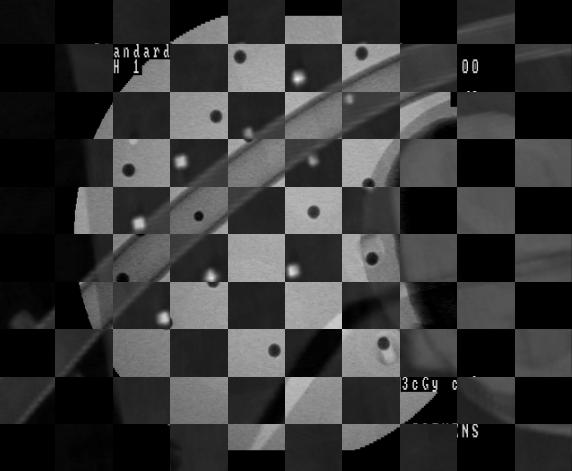 Visual overlay of the DRR and the X-ray image
Project Files: